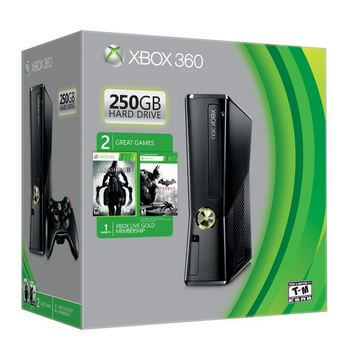 Amazon is offering a HOT deal on the Xbox 360 S 250GB Spring Value Bundle. With this sale you will pay only $249.99 (reg. $299.99) plus recieve a $50 Amazon credit. This promotional credit can be used towards any future purchase of items shipped and sold by Amazon.com. After the credit this is like paying only $199.99 for the Xbox 360!

The Xbox 360 250GB Spring (H2) Value Bundle features two free games, Darksiders 2 and Batman Arkham City, and 1 Month of Xbox LIVE Gold free for a limited time this Spring. Wi-Fi is built-in for easier connection to the world of entertainment on Xbox LIVE, where HD movies and TV stream in an instant. Xbox 360 is more games, entertainment and fun.

• Xbox 360 S Console: The Xbox 360 console is sleek and quiet, with a stylish design that will be the center piece of your home entertainment system.

• Two amazing games: Darksiders 2: Follow the exploits of Death, horseman of the Apocalypse, in a tale that runs parallel to the events in the original Darksiders game. This epic journey propels Death through the light and dark realms as he strives to redeem his brother War, blamed for inciting Armageddon and the eradication of Mankind…

Batman Arkham City: No escape from Arkham City…the sprawling super-prison in the heart of Gotham City, home to its most violent thugs and infamous super villains. With the lives of the innocent at stake, only one man can save them and bring justice to the streets of Gotham City…The Batman.

• Built-in Wi-Fi: The Xbox 360 is the only console with 802.11n Wi-Fi built in for a faster and easier connection to Xbox LIVE. Download or stream HD movies, TV episodes, and games from Xbox LIVE Marketplace in 1080p and 5.1 surround sound from anywhere in the house. Compatible with b/g/n networks.

• Kinect ready: Kinect makes YOU the controller. With a dedicated, specialized port, the Xbox 360 250GB is built to connect seamlessly with the Kinect sensor- and have you up off the couch and into the world of Kinect in no time.

• Xbox 360 Wireless Controller: This award-winning, high-performance wireless controller features the Xbox Guide Button for quick, in-game access to friends and music. It has a range of up to 30 feet to allow you to play all over your living room

Get your Xbox 360 S 250GB Spring Value Bundle here while it is at this low price. Please double check the price before purchasing, as prices can change quickly on Amazon.