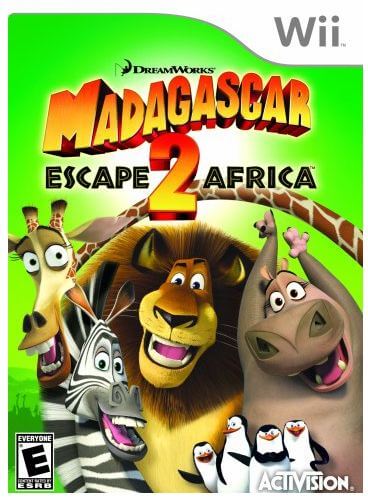 Amazon is offering the Madagascar 2: Escape 2 Africa Wii game for only $9.99 (reg. $29.99). At this price now be the perfect time to snag this game for an upcoming birthday gift.

Join Alex the lion, Melman the giraffe, Gloria the hippo, and the entire madcap Madagascar crew as they journey to the African Savannah in an attempt to save it from destruction in Madagascar 2: Escape 2 Africa for Nintendo Wii. Play as all your favorite characters, including the wacky penguins and King Julian. Each character has unique combat moves, so once you learn them all, you can choose which character is best for each of the twelve different levels and ten mini-game tournaments. The areas of the game have all been expanded, including the Watering Hole, which is now a complete free-roaming area, the Volcano, and the plane crash. Then join up with your friends for twice as much multiplayer fun as the first game.

Get the Madagascar 2: Escape 2 Africa Wii game here while it is at this low price. Please double check the price before purchasing, as prices can change quickly on Amazon.